Into the Green & Blues Street Festival

Into the Green & Blues Street Festival

Into the Green & Blues Street Festival! 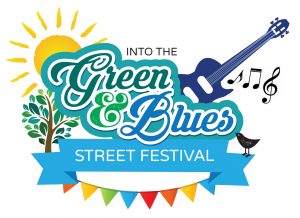 Join us for this kick-off to spring street festival in Downtown Orillia!

Watch the main street come to life with amazing live music and performances by The Slocan Ramblers, Ever-Lovin’ Jug Band, Paul Reddick, a live DJ, The Party Magician and many, many more!

Bring the whole family and enjoy outdoor exhibits, entertainment for the kids, bouncy castles, an obstacle course, face painting and of course, amazing sidewalk sales for the adults;).

Check out the amazing line-up of talent planned for this year’s Into the Green & Blues Street Festival in Downtown Orillia!

The Slocan Ramblers (2019 Juno Award Nominees) are Canada’s bluegrass band to watch. Rooted in tradition, fearlessly creative and possessing a bold, dynamic sound, The Slocans have become a leading light of today’s acoustic music scene. With a reputation for energetic live shows, impeccable musicianship and an uncanny ability to convert anyone within earshot into a lifelong fan, The Slocans have been winning over audiences from Merlefest to Rocky Grass and everywhere in between.

A devotee of pre-war blues and classic artists such as Muddy Waters, Sonny Boy Williamson and Howlin’ Wolf, Reddick formed his innovative band Paul Reddick & The Sidemen in Toronto in 1990, developing a cult-like following in the clubs and venues on the circuit at the time and spent the better part of a decade touring across Canada.

Trading lead vocals, and playing multiple instruments at once, the Ever-Lovin’ Jug Band produces a truly authentic old-time sound.  Minnie Heart plays fiddle/banjolin/kazoo and an unusual foot-bass, while Bill Howard plays guitar and jug.
Traveling all over Canada and the U.S., they have played in every imaginable venue, from large halls, to loud bars, to small, acoustic cafes, and have performed at countless festivals, including the National Jug Band Jubilee, the Brooklyn Folk Festival, and the Mariposa Folk Festival, to name a few.

Delta Stone and The Wardogs is Canada’s best kept secret; one-of-a-kind handmade boutique original rock ‘n’ roll from London, Ontario. Delta Stone, the lead guitar duo of Ian Stone & Houndog Houle backed up by The Wardogs: Warren ‘Wardog’ Stinson on drums, ‘Cryin’ Ryan McNevin on Keys and Mark Irmler on bass featuring Rickie Lee Olean and Nelle Fuentes on backup vocals. With a 70’s southern rock style that leans hard on the blues they carry with them an established, monumental sound that hits hard, and ensnares audiences in the bastion of rock and roll mythology.

HOBO Jam has the purpose of bringing together seasoned players and young upstarts with the talent to play songs we like. In the meantime, they also offer a band for fundraising, parties and other get-togethers that need some variety in entertainment. Sometimes they’re a duo or trio, with focus on blues, or jazz, or power rock…. sometimes they’re a quartet or five or six……music defined for the occasion.

Having shown a love for music from a very young age, DJ Gord Kirby has been fine-tuning his DJ skills with a unique repertoire of mixes, music elements and playlists. His career took off in 1998, propelled by the love and inspiration of the of sounds of his youth coupled with the pure enjoyment of making people happy through that joy. With influences ranging from 80s pop to indie and hip hop, this is one DJ who isn’t afraid to innovate and try something new.

Petra is comprised of a father, daughter acoustic duo, Peter and Laura Harbocian. Peter honours his early musical influences from his childhood growing and playing in the Catskills Mountains of New York State. 60’s and 70’s folk, bluegrass and acoustic music of every kind have shaped his style and sound. Peter is an accomplished guitarist, vocalist and a seasoned performer. Laura began playing guitar and writing music as a teenager in the 90’s. Her two-year attendance at the Marilyn Walker Academy of Fine and Performing Arts helped to shape and hone her musical talent. Laura adds to her fine skills as a guitarist a unique vocal style and tone.

Stay tuned for more features and entertainment to come and a full Into the Green & Blues program.

If you are a downtown merchant and would like to participate in the event, please fill out the Merchant Participation form and send it in to us via email at office@downtownorillia.ca or via fax at 705-325-7666.

Reserve your spot on the street!

If you are an Artisan, Outside Vendor, Food Vendor, Confection Vendor or a Community Partner and would like to come be a part of this awesome new Street Festival experience, be sure to fill out your vendor forms and return them to us ASAP.

Don’t miss your chance to be a part of a fun filled weekend in Downtown Orillia.